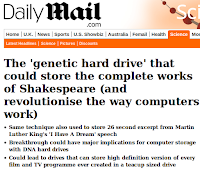 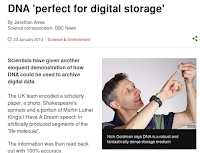 The talk after mine was by Brian Bramlett of Twist Bioscience about the roadmap and research efforts in DNA storage that evolved from an IARPA/SRC workshop in 2016. It sounded a lot more optimistic than my talk. As I recall, the 4-year goals were a system capable of reading and writing a Terabyte in 24 hours, and cost parity with tape.

But I don't see that there's a conflict between our two talks. Recall for example that it is 27 years since the first shipment of a flash product yet flash has not impacted the bulk storage market. There is a huge difference between a lab demo and being able to ship hundreds of Exabytes of product at a profit.

Katyanna Quach reports that DNA storage can get denser:

"Scientists say they have crafted a semi-synthetic DNA and RNA molecular system that is able to usefully store genetic information.
...
The biologists also had to adapt the reader-transcriber (the polymerase) enzyme to be able to transcribe the DNA to RNA.

Unlike traditional DNA, this new semi-synthetic system is made up of eight key ingredients instead of the usual four: adenine, guanine, thymine and cytosine. The additional four molecules have incredibly long complex chemical names to spell out here, but have similar structures to the classical nucleotides found in traditional DNA."