One of the most interesting sessions at the recent CNI was on the Ontario Library Research Cloud (OLRC). It is a collaboration between universities in Ontario to provide a low-cost, distributed, mutually owned private storage cloud with adequate compute capacity for uses such as text-mining. Below the fold, my commentary on their presentations.

Two recent papers examine the growth of peer-to-peer sharing of journal articles. Guilliame Cabanac's Bibliogifts in LibGen? A study of a text-sharing platform driven by biblioleaks and crowdsourcing (LG) is a statistical study of the Library Genesis service, and Carolyn Caffrey Gardner and Gabriel J. Gardner's Bypassing Interlibrary Loan via Twitter: An Exploration of #icanhazpdf Requests (TW) is a similar study of one of the sources for Library Genesis. Both implement forms of Aaron Swartz's Guerilla Open Access Manifesto, a civil disobedience movement opposed to the malign effects of current copyright law on academic research. Below the fold, some thoughts on the state of this movement.

3D Flash - not as cheap as chips

Chris Mellor has an interesting piece at The Register pointing out that while 3D NAND flash may be dense, its going to be expensive.

The reason is the enormous number of processing steps per wafer - between 96 and 144 deposition layers for the three leading 3D NAND flash technologies. Getting non-zero yields from that many steps involves huge investments in the fab: 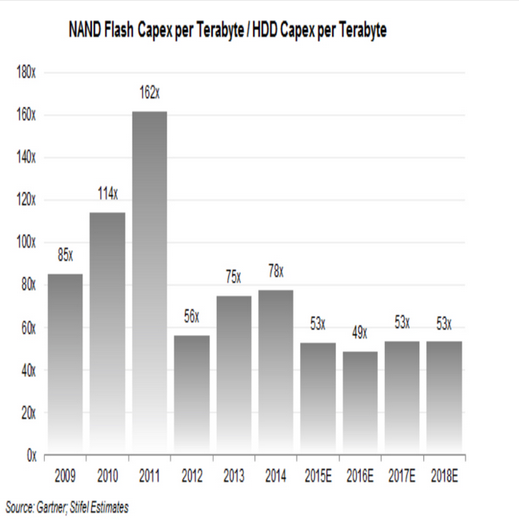 Samsung, SanDisk/Toshiba, and Micron/Intel have already announced +$18bn investment for 3D NAND.
This compares with Seagate and Western Digital’s capex totalling ~$4.3 bn over the past three years.

Chris has this chart, from Gartner and Stifel, comparing the annual capital expenditure per TB of storage of NAND flash and hard disk. Each TB of flash contains at least 50 times as much capital as a TB of hard disk, which means it will be a lot more expensive to buy.

PS - "as cheap as chips" is a British usage.

Trying to fix the symptoms

In response to many complaints that the peer review process was so slow that it was impeding scientific progress, Nature announced that they would allow authors to pay to jump the queue:


As of 24th March 2015, a selection of authors submitting a biology manuscript to Scientific Reports will be able to opt-in to a fast-track peer-review service at an additional cost. Authors who opt-in to fast-track will receive an editorial decision (accept, reject or revise) with peer-review comments within three weeks of their manuscript passing initial quality checks.

It is true that the review process is irritatingly slow, but this is a bad idea on many levels. Such a bad idea that an editorial board   member resigned in protest. Below the fold I discuss some of the levels.

The Mystery of the Missing Dataset

I was interviewed for an upcoming news article in Nature about the problem of link rot in scientific publications, based on the recent Klein et al paper in PLoS One. The paper is full of great statistical data but, as would be expected in a scientific paper, lacks the personal stories that would improve a news article.

I mentioned the interview over dinner with my step-daughter, who was featured in the very first post to this blog when she was a grad student. She immediately said that her current work is hamstrung by precisely the kind of link rot Klein et al investigated. She is frustrated because the dataset from a widely cited paper has vanished from the Web. Below the fold, a working post that I will update as the search for this dataset continues.

Carl Straumsheim at Inside Higher Ed reports on a sorely-needed new Mellon Foundation initiative supporting digital publishing in the humanities:

The foundation in May sent university press directors a request for proposals to a new grant-making initiative for long-form digital publishing for the humanities. In the e-mail, the foundation noted the growing popularity of digital scholarship, which presented an “urgent and compelling” need for university presses to publish and make digital work available to readers.


The foundation’s proposed solution is for groups of university presses to ... tackle any of the moving parts that task is comprised of, including “...(g) distribution; and (h) maintenance and preservation of digital content.”

Below the fold, some thoughts on this based on experience from the LOCKSS Program.