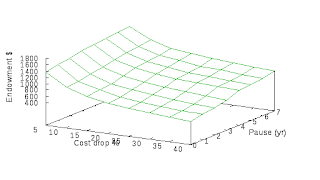 As expected, the faster the disk price drops and the shorter the pause before it does, the lower the endowment needed. In this simulation the endowment needed ranges from 4.2 to 17.6 times the initial cost of storage, but these numbers should be taken with a grain of salt. It is early days and the model has many known deficiencies.
Posted by David. at 3:15 PM 3 comments: