I was an early employee at three VC-funded startups from the 80s and 90s. All of them IPO-ed and two (Sun Microsystems and Nvidia) made it into the list of the top 100 US companies by market capitalization. So I'm in a good position to appreciate Jeffrey Funk's must-read The Crisis of Venture Capital: Fixing America’s Broken Start-Up System. Funk starts:


Despite all the attention and investment that Silicon Valley’s recent start-ups have received, they have done little but lose money: Uber, Lyft, WeWork, Pinterest, and Snapchat have consistently failed to turn profits, with Uber’s cumulative losses exceeding $25 billion. Perhaps even more notorious are bankrupt and discredited start-ups such as Theranos, Luckin Coffee, and Wirecard, which were plagued with management failures, technical problems, or even outright fraud that auditors failed to notice.

What’s going on? There is no immediately obvious reason why this generation of start-ups should be so financially disastrous. After all, Amazon incurred losses for many years, but eventually grew to become one of the most profitable companies in the world, even as Enron and WorldCom were mired in accounting scandals. So why can’t today’s start-ups also succeed? Are they exceptions, or part of a larger, more systemic problem?

Below the fold, some reflections on Funk's insightful analysis of the "larger, more systemic problem". 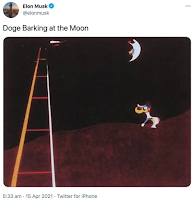 What Is The Point?

During a discussion of NFTs, Larry Masinter pointed me to his 2012 proposal The 'tdb' and 'duri' URI schemes, based on dated URIs. The proposal's abstract reads:
As far as I can tell, this proposal went nowhere, but it raises a question that is also raised by NFTs. What is the point of a link that is unlikely to continue to resolve to the expected content? Below the fold I explore this question.

One of the earliest observations of the behavior of the Web at scale was "link rot". There were a lot of 404s, broken links. Research showed that the half-life of Web pages was alarmingly short. Even in 1996 this problem was obvious enough for Brewster Kahle to found the Internet Archive to address it. From the Wikipedia entry for Link Rot:


A 2003 study found that on the Web, about one link out of every 200 broke each week,[1] suggesting a half-life of 138 weeks. This rate was largely confirmed by a 2016–2017 study of links in Yahoo! Directory (which had stopped updating in 2014 after 21 years of development) that found the half-life of the directory's links to be two years.[2]

One might have thought that academic journals were a relatively stable part of the Web, but research showed that their references decayed too, just somewhat less rapidly. A 2013 study found a half-life of 9.3 years. See my 2015 post The Evanescent Web.

I expect you have noticed the latest outbreak of blockchain-enabled insanity, Non-Fungible Tokens (NFTs). Someone "paying $69M for a JPEG" or $560K for a New York Times column attracted a lot of attention. Follow me below the fold for the connection between NFTs, "link rot" and Web archiving.

China’s bitcoin mines could derail carbon neutrality goals, study says and Bitcoin mining emissions in China will hit 130 million tonnes by 2024, the headlines say it all. Excusing this climate-destroying externality of Proof-of-Work blockchains requires a continuous flow of new misleading arguments. Below the fold I discuss one of the more recent novelties.

Although both Tesla and SpaceX are major engineering achievements, Elon Musk seems completely unable to understand the concept of externalities, unaccounted-for costs that society bears as a result of these achievements.

First, in Tesla: carbon offsetting, but in reverse, Jaime Powell reacted to Tesla taking $1.6B in carbon offsets which provided the only profit Tesla ever made and putting them into Bitcoin:


Looked at differently, a single Bitcoin purchase at a price of ~$50,000 has a carbon footprint of 270 tons, the equivalent of 60 ICE cars.

We’re not sure about you, but FT Alphaville is struggling to square the circle of “buy a Tesla with a bitcoin and create the carbon output of 60 internal combustion engine cars” with its legendary environmental ambitions.

Unless, of course, that was never the point in the first place.

Below the fold, more externalities Musk is ignoring.