It Was 40 Years Ago Today

Sun Microsystems was founded 24th February 1982, and died 27th January 2010. I spent 1982 on sabbatical in Amsterdam waiting for the Sun/1 we had ordered to show up. IIRC I visited their initial offices on Walsh Ave. in Santa Clara in early 1983, and joined the company in September 1985. I owe Sun, and the people who worked there, a debt of gratitude I could never repay.

In those early days Sun was an extraordinarily interesting company to work for, and throughout its 28-year history it spawned an incredible number of other startups. One of them was Nvidia, which is currently the 8th most valuable company in the world, but there are far too many others to list.

In It Isn't About The Technology I wrote:


In the late 80s I foresaw a bleak future for Sun Microsystems. Its profits were based on two key pieces of intellectual property, the SPARC architecture and the Solaris operating system. In each case they had a competitor (Intel and Microsoft) whose strategy was to make owning that kind of IP too expensive for Sun to compete. I came up with a strategy for Sun to undergo a radical transformation into something analogous to a combination of Canonical and an App Store. I spent years promoting and prototyping this idea within Sun.

One of the reasons I have great respect for Scott McNealy is that he gave me, an engineer talking about business, a very fair hearing before rejecting the idea, saying "Its too risky to do with a Fortune 100 company". Another way of saying this is "too big to pivot to a new, more “sustainable” business model".

In the terms that Wall St. imposes on public companies, Scott was right and I was wrong. In the 8 years or so from my talk to the dot-com crash SUNW made the stockholders an incredible amount of money. But then the money stopped, in some ways for the reasons I had spotted. Being right too soon is as bad as being wrong. 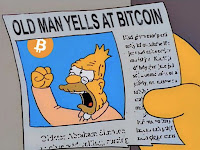 My EE380 talk gained about a quarter-million page views, thanks to @markrussinovich, a shout-out from Prof. Dave Farber, and an enthusiastic review from Cory Doctorow.

Unusually for my blog, the majority of the comments weren't spam, and almost all passed moderation. Here are some hints that will help your comment survive moderation:
Compared to most authors posting criticism of cryptocurrencies I was very lucky. The reason I started the talk by pointing out that I wasn't "talking my book" is that the discourse around cryptocurrencies has become corrupted by HODL-ers "talking their book", and that their response to critics is often toxic.

Below the fold, I look at this problem.

The February 8th arrest of Ilya Lichtenstein and Heather Morgan, accused of laundering the proceeds of the August 2016 theft of nearly 120K BTC from the BitFinex exchange, has been all over the media since, fuelled largely by her double life as a Forbes writer and rapper, and her cringe-worthy social media presence. Inside the Bitcoin Laundering Case That Confounded the Internet by Ali Watkins and Benjamin Weiser for the New York Times is an example.

The technical aspects of how law enforcement identified them and seized much of the loot have gained less coverage. Below the fold I look into this aspect of the case, using what information is public.

I was invited to present to the Bace Cybersecurity Institute. My talk was slightly condensed and updated from my talk to Stanford's EE380 course, which was an updated version of my talk to the TTI/Vanguard Conference last December. The latest text with links to the sources and much additional material is below the fold.

I was asked at short notice to fill in for a speaker in Stanford's EE380 course who had to cancel. Below the fold is a hastily updated version of a talk from last December.

Update 28th February: the video of this talk is here.

Early last September, before the Omicron surge, I posted Excess Deaths. It was based on The Economist's excess death model. Back then, the model's estimate for the US was about 250 per 100K. I wrote:


Excess deaths in the US and the UK are far from the worst, but my point is that countries at a similar level of development have done far better, and so have much less well-resourced countries. Had the US done as well as the model's estimate for China (38 vs. 250) about 702,000 more Americans would be alive today.

Below the fold, I look at how Omicron has changed the picture.

In Alternatives To Proof-of-Work I wrote:

The Chia "price" chart suggests that it might have been a "list-and-dump" scheme, in which A16Z and the other VCs incentivized the miners to mine and the exchanges to list the new cryptocurrency so that the VCs could dump their HODL-ings on the muppets seduced by the hype and escape with a profit.

Now, in "You Don't Own Web3": A Coinbase Curse and How VCs Sell Crypto to Retail, Fais Khan takes the idea of "list and dump" and runs with it:


If coins, especially VC-backed coins, consistently underperformed Bitcoin/Ethereum after listing on Coinbase, that says to me that insiders were waiting for a big, dollar-based exchange to list so they could sell - VCs taking profits at the expense of retail. Those insiders include venture capital firms like a16z and, incredibly, Coinbase’s own venture arm, which has a number of investments listed on Coinbase. Other exchanges like Kraken, FTX, and Gemini are also all active in venture, and have listed their own investments.

Below the fold I comment on Khan's excellent analysis.