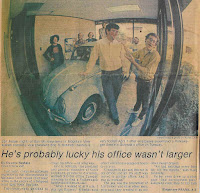 Look at what I stumbled upon on the man page for GNU indent, a program that formats C source code:

"The ‘-bs’ option ensures that there is a space between the keyword sizeof and its argument. In some versions, this is known as the ‘Bill_Shannon’ option."

Good to know his relationship with this specific choice of style. Very interesting person. RIP.