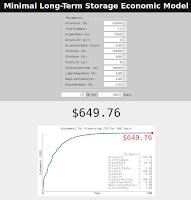 Five years ago, at the urging of the Internet Archive, I implemented a simple interactive version of the Economic Model of Long-Term Storage in Python. It estimated the endowment needed to store a Terabyte for 100 years based on a set of parameters that people could vary. It ran on a Raspberry Pi at the end of our Sonic DSL home Internet connection. The endowment is the capital which, together with the interest it earns, is enough to cover the costs incurred stoing the data for the century.

Alas, the Pi became a casualty when, early in the pandemic, we upgraded to the wonderful Sonic gigabit fiber (Best ISP Evah!), needed to support multiple grandkids each in a different virtual school.

Fortunately, Sawood Alam at the Internet Archive has forked the code, re-implemented it in Javascript, improved the user interface, and deployed it at Github. This new version is once again available here. I'm very grateful to Sawood and the team at the Internet Archive, both for pushing me to do the initial implementation, and now for bringing it back from the dead.

Below the fold I have a couple of caveats.

It is important to note that the model is somewhat simplistic. At the bottom of the page is a set of assumptions that users should understand before taking the result too seriously.

One more critique is that the model assumes hard disk as the storage medium for the whole century. This unlikely to happen, but it results in a conservative estimate of the endowment needed. This is because if a technology is to displace hard disk as the medium at some point in the future, it will have to be cheaper.

'This unlikely to happen, but it results in a conservative estimate of the endowment needed. This is because if a technology is to displace hard disk as the medium at some point in the future, it will have to be cheaper.'

This is not neccesarily true unfortunately. Hard drives could be replaced in the mass market for some other

As we see with flash vs. hard disk for many years, it is essentially impossible for a more expensive technology to displace a cheaper one in the bulk storage market. So, as I wrote, the model's estimate is conservative i.e. possibly more than the minimum required.