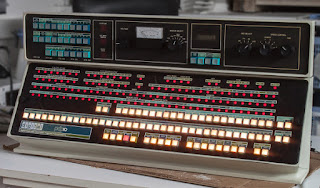 Via hackaday, [Jörg]'s magnificently restored PDP10 console, connected via a lot of wiring to a BeagleBone running the SIMH PDP10 emulator. He did the same for a PDP11. Two computers that gave me hours of harmless fun back in the day!

Kids today have no idea what a computer should look like. But even they can run [Jörg]'s Java virtual PDP10 console!
Posted by David. at 8:00 AM No comments:

In my recent Internet of Things post I linked to Jim Gettys' post Bufferbloat and Other Challenges. In it Jim points to a really important 2010 paper by Sandy Clarke, Matt Blaze, Stefan Frei and Jonathan Smith entitled Familiarity Breeds Contempt: The Honeymoon Effect and the Role of Legacy Code in Zero-Day Vulnerabilities.


We show that the length of the period after the release of a software product (or version) and before the discovery of the first vulnerability (the ’Honeymoon’ period) is primarily a function of familiarity with the system. In addition, we demonstrate that legacy code resulting from code re-use is a major contributor to both the rate of vulnerability discovery and the numbers of vulnerabilities found; this has significant implications for software engineering principles and practice.

Last month I was finally able to post about Facebook's cold storage technology. Now, Subramanian Muralidhar and a team from Facebook, USC and Princeton have a paper at OSDI that describes the warm layer between the two cold storage layers and Haystack, the hot storage layer. f4: Facebook's Warm BLOB Storage System is perhaps less directly aimed at long-term preservation, but the paper is full of interesting information. You should read it, but below the fold I relate some details.
Read more »
Posted by David. at 8:00 AM 1 comment:

Anurag Acharya and co-authors from Google Scholar have a pre-print at arxiv.org entitled Rise of the Rest: The Growing Impact of Non-Elite Journals in which they use article-level metrics to track the decreasing importance of the top-ranked journals in their respective fields from 1995 to 2013. I've long argued that the value that even the globally top-ranked journals add is barely measurable and may even be negative; this research shows that the message is gradually getting out. Authors of papers subsequently found to be "good" (in the sense of attracting citations) are slowly but steadily choosing to publish away from the top-ranked journals in their field. You should read the paper, but below the fold I have some details.

The Internet of Things

In 1996, my friend Steven McGeady gave a fascinating and rather prophetic keynote address to the Harvard Conference on the Internet and Society. In his introduction, Steven said:

This is bunk. I'm worried that our imagination about the way that the 'Net changes our lives, our work and our society is limited to taking current institutions and dialling them forward - the "more, better" school of vision for the future.

I have the same worries that Steven did about discussions of the Internet of Things that looms so large in our future. They focus on the incidental effects, not on the fundamental changes. Barry Ritholtz points me to a post by Jon Evans at TechCrunch entitled The Internet of Someone Else's Things that is an exception. Jon points out that the idea that you own the Smart Things you buy is obsolete:


They say “possession is nine-tenths of the law,” but even if you physically and legally own a Smart Thing, you won’t actually control it. Ownership will become a three-legged stool: who physically owns a thing; who legally owns it; …and who has the ultimate power to command it. Who, in short, has root.

What does this have to do with digital preservation? Follow me below the fold.

Economies of Scale in Peer-to-Peer Networks

In a recent IEEE Spectrum article entitled Escape From the Data Center: The Promise of Peer-to-Peer Cloud Computing, Ozalp Babaoglu and Moreno Marzolla (BM) wax enthusiastic about the potential for Peer-to-Peer (P2P) technology to eliminate the need for massive data centers. Even more exuberance can be found in Natasha Lomas' Techcrunch piece The Server Needs To Die To Save The Internet (LM) about the MaidSafe P2P storage network. I've been working on P2P technology for more than 16 years, and although I believe it can be very useful in some specific cases, I'm far less enthusiastic about its potential to take over the Internet.

Below the fold I look at some of the fundamental problems standing in the way of a P2P revolution, and in particular at the issue of economies of scale. After all, I've just written a post about the huge economies that Facebook's cold storage technology achieves by operating at data center scale.