Four years ahead of her time

As I pointed out in my JCDL2010 keynote, Vicky Reich put this 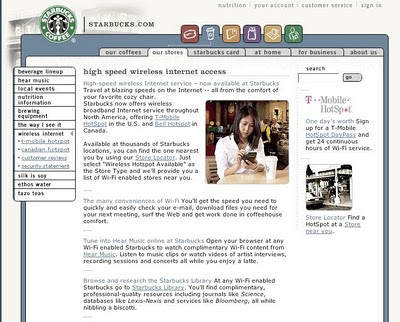 fake Starbucks web page together four years ago to predict that libraries without digital collections, acting only as a distribution channel for digital content from elsewhere, would end up competing with, and losing to, Starbucks.

This prediction has now come true.

The Future of the Federal Depository Libraries

Governments through the ages have signally failed to resist the temptation to rewrite history. The redoubtable Emptywheel pointed me to excellent investigative reporting by ProPublica's Dafna Linzer which reveals a disturbing current example of rewriting history.

By being quick to notice, and take a copy of, a new entry in an on-line court docket Linzer was able to reveal that the Obama administration, in the name of national security, forced a Federal judge to create and enter into the court's record a misleading replacement for an opinion he had earlier issued. ProPublica's comparison of the original opinion which Linzer copied and the later replacement reveals that in reality the government wanted to hide the fact that their case against an alleged terrorist was extraordinarily thin, and based primarily on statements from detainees who had been driven mad or committed suicide as a result of their interrogation. Although the fake opinion comes to the same conclusion as the real one, the arguments are significantly different. Judges in other cases could be misled into relying on witnesses this judge discredited for reasons that were subsequently removed.

Linzer's expose of government tampering with a court docket is an example of the problem on which the LOCKSS Program has been working for more than a decade, how to make the digital record resistant to tampering and other threats. The only reason this case was detected was because Linzer created and kept a copy of the information the government published, and this copy was not under their control. Maintaining copies under multiple independent administrations (i.e. not all under control of the original publisher) is a fundamental requirement for any scheme that can recover from tampering (and in practice from many other threats). Techniques such as those developed by Stuart Haber can detect tampering without keeping a copy, but cannot recover from it.

In the paper world the proliferation of copies in the Federal Depository Library Program made the system somewhat tamper-resistant. A debate has been underway for some time as to the future of the FDLP in the electronic world - the Clinton and Bush administrations were hostile to copies not under their control but the Obama administration may be more open to the idea. The critical point that this debate has reached is illuminated by an important blog post by James Jacobs. He points out that the situation since 1993 has been tamper-friendly:

But, since 1993, when The Government Printing Office Electronic Information Access Enhancement Act (Public Law 103-40) was passed, GPO has arrogated to itself the role of permanent preservation of government information and essentially prevented FDLP libraries from undertaking that role by refusing to deposit digital materials with depository libraries.

On the other hand, GPO does now make their documents available for bulk download and efforts are under way to capture them.

The occasion for Jacobs' blog post is that GPO has contracted with Ithaka S+R to produce a report on the future of the FDLP. The fact that GPO is willing to revisit this issue is a tribute to the efforts of government document librarians, but there are a number of reasons for concern that this report's conclusions will have been pre-determined:It is important to note that although a system for preserving government documents consisting of the GPO and "formal partnerships with a small number of dedicated preservation entities" might well improve the resistance of government documents to some threats, it provides much less resistance to government tampering than the massively distributed paper FDLP. The "small number of dedicated preservation entities" dependent on "formal partnerships" with the government in the form of the GPO will be in a poor position to resist government arm-twisting aimed at suppressing or tampering with embarrassing information.

"Petabyte for a Century" Goes Main-Stream

I started writing about the insights to be gained from the problem of keeping a Petabyte for a century four years ago in September 2006. More than three years ago in June 2007 I blogged about them. Two years ago in September 2008 these ideas became a paper at iPRES 2008 (PDF). After an unbelievable 20-month delay from the time it was presented at iPRES, the International Journal of Digital Preservation finally published almost exactly the same text (PDF) in June 2010.

Now, an expanded and improved version of the paper, including material from my 2010 JCDL keynote, has appeared in ACM Queue.

Alas, I'm not quite finished writing on this topic. I was too busy when I was preparing this article and so I failed to notice an excellent paper by Kevin Greenan, James Plank and Jay Wylie, Mean time to meaningless: MTTDL, Markov models, and storage system reliability.

They agree with my point that MTTDL is a meaningless measure of storage reliability, and that bit half-life isn't a great improvement on it. They propose instead NOMDL (NOrmalized Magnitude of Data Loss), i.e. the expected number of bytes that the storage will lose in a specified interval divided by its usable capacity. As they point out, it is possible to compute this using Monte Carlo simulation based on distributions of component failures that experiments have shown to fit the real world. These simulations produce estimates that are relatively credible, especially compared to the ludicrous estimates I pillory in the article.

NOMDL is a far better measure than MTTDL. Greenan, Plank and Wylie are to be congratulated for proposing it. However, it is not a panacea. It is still the result of models based on data, rather than experiments on the system in question. The major points of my article still stand:

"Even if we are sublimely confident that every source of data loss other than bit rot has been totally eliminated, we still have to run a benchmark of the system’s bit half-life to confirm that it is longer than [required]"

However good simulations of the kind Greenan et al. propose may be, at some point we need to compare them to the reliability that the systems actually deliver.
Posted by David. at 4:48 PM 1 comment:

A Level Playing-Field For Publishers

Stuart Shieber has an interesting paper in PLoS Biology on the economics of open-access publishing. He observes the moral hazard implicit in the separation between the readers of peer-reviewed science and the libraries that pay the subscriptions to the publishers that make the peer review possible. His proposal to deal with this is that grant funders and institutions should make dedicated funds available to authors that can be used only for paying processing fees for open access journals. After all, he observes, these funders already support the subscriptions that allow subscription journals not to charge processing fees (although some still do charge such fees). His proposal would provide a more level playing field between subscription and open access publishing channels. Below the fold is my take on how we can measure the level-ness of this field.