As Jemima Kelley notes in Crypto bros take the fight back to Elon as prices tank the speculators aren't happy and they know who is to blame:


Up until recently utterly enamoured with the self-stylised technoking, the brodom has become incensed after Musk sent the price of bitcoin sliding by tweeting first that Tesla would no longer be accepting bitcoin (because of its environmental impact), and then sent it down further over the weekend after appearing to suggest that Tesla would dump its bitcoin holdings because of the way he was being treated by the bros. (He later clarified that Tesla had not, at this point, sold any bitcoin.) Of course, he also found time to boast about his superior knowledge of money due to his time at PayPal.

Below the fold, I try to dispassionately assign blame for this flaw in the natural order of things.

The immediate reaction of the crypto-bros was, wait for it, to create the 9,857th (F---ELON) and 9,858th (F---ELONTWEET) cryptocurrencies and pump them! That'll show Elon who's boss!

The crypto-bros aren't completely wrong. In Elon Musk’s Bitcoin Fun Continues Matt Levine describes Musk's grip on the cryptocurrency markets, comparing it to a money machine based on a magic lamp with a genie inside who could move prices up or down:


So if he was doing the magic-lamp trading strategy — which, again, I don’t think he is — it would look, to an outside observer, more or less exactly like what he’s currently doing.

I just think that if you presented this possibility to any famous investor throughout history they would absolutely faint with excitement. And here Musk is, the second-richest person in the world, either doing it — in which case it’s one of the greatest trades, and also one of the greatest trolls, in history — or not doing it, rubbing the lamp and making Bitcoin and Dogecoin go up and down and up and down and up and down with his whims, just for fun, leaving billions of dollars of profit on the table because he doesn’t need the money and has the purest imaginable commitment to internet trolling.

Levine is right about the lack of regulation. Hamza Shaban's As cryptocurrency goes wild, fear grows about who might get hurt reports on a recent Congressional hearing:


The SEC’s recent warnings of the dangers of bitcoin follow calls for more muscular government action, establishing a federal watchdog with a clear mandate to oversee cryptocurrency’s regulatory gray area.

“Right now the exchanges trading in these crypto assets do not have a regulatory framework, either at the SEC or our sister agency, the Commodity Futures Trading Commission,” SEC Chair Gary Gensler told Congress earlier this month in one of his first remarks on cryptocurrency regulation. “Right now there’s not a market regulator around these crypto exchanges. And thus there’s really not protection against fraud or manipulation.”

"Not protection against" is an English-level understatement. "Rife with fraud and manipulation" would be nearer the mark. David Gerard is blunter in Bitcoin crashed today — it was market shenanigans, not China:

Michael Batnick explains that, in fact, the crypto-bros are mostly wrong in blaming Musk. In Bitcoin is Crashing. This is What it Does he writes:


This is the 10th time since 2017 that Bitcoin was at an all-time high and then fell 30%.
And yet despite these brutal declines, the price is up ~50x over the same time. Bitcoin is the definition of no pain, no gain. Did you think getting hilariously rich was easy?

Well, yes, but the risk of losing it all is real. Hamza also quotes Andrew Bailey, governor of the Bank of England:


“Buy them only if you’re prepared to lose all your money.”

As I described in The Bitcoin "Price", cryptocurrencies are not really priced in fiat currencies, but in a "stablecoin" called Tether (USDT) which, like money market funds, is supposed to be tied to the US Dollar (USD). In Tether's case it was originally claimed that it was tied because it was backed 1-for-1 by USD in a bank account.

There are many reasons for skepticism about USDT's tie, among them being Tether's admission in court two years ago that it was only 74% backed by USD, its loss of $850M in the Crypto Capital scam, their $18.5M settlement with the NY Attorney General over false claims, and their recent pathetic attempt to satisfy the transparency requirements of the settlement by publishing two piecharts.

Frances Coppola makes an important point in Tether’s smoke and mirrors. Tether's terms of service place them under no obligation to redeem Tethers for fiat or indeed for anything at all:

Coppola points out that this means that whether only 2.94% of the backing is USD in a bank account isn't the reason for skepticism:


if Tether is simply going to refuse redemption requests or offer people tokens it has just invented instead of fiat currency, it wouldn’t matter if the entire asset base was junk, since it will never have any significant need for cash.

So whether Tether’s "reserves" are cash equivalents doesn't matter. But what does matter is capital.

For banks, funds and other financial institutions, capital is the difference between assets and liabilities. It is the cushion that can absorb losses from asset price falls, whether because of fire sales to raise cash for redemption requests or simply from adverse market movements or creditor defaults.

The accountant's attestations reveal that Tether has very little capital. The gap between assets and liabilities is paper-thin: on 31st March 2021 (pdf), for example, it was 0.36% of total consolidated assets, on a balance sheet of more than $40bn in size. Stablecoin holders are thus seriously exposed to the risk that asset values will fall sufficiently for the par peg to USD to break – what money market funds call “breaking the buck”.

The money market fund Reserve Primary MMF broke the buck in 2008 due to significant losses from its holdings of Lehman paper. Its net asset value (NAV) only fell to 97 cents, but that was enough to trigger a rush for the exit. Reserve Primary became insolvent and was eventually wound up.

The Federal Reserve had to step in to prevent a run on all the other money market funds, promising as with bank accounts to make sure they didn't lose investors' money. They're not going to do that if Tether breaks the buck. And if it does, Tether can simply refuse to redeem USDT, which would make the "prices" of cryptocurrencies entirely untethered from fiat.


But someone seems worried about Tether. There are a few thinly-traded USDT/USD pairs on exchanges; Coinbase just launched theirs. Usually, the peg is solid at $1.00 plus-or-minus a tenth of a cent.

Today, the peg slipped — and tethers have been bouncing between $0.90 and $1.10 on different exchanges. This sort of thing hasn’t been seen since October 2018, when Bitfinex found out that $850 million of Tether’s backing had disappeared with their dodgy payments processor.
...
Bitcoin went from $30,000.00 (precisely) back up over $42,000 this afternoon, coincidentally with Tether sending 500 million USDT to Binance. Tether’s still here, with their thumb on the scale

Bitcoin is a market with a very visible hand.

Update 31st May 2021: As regards pump-and-dump schemes, Izabella Kaminska's Goldman’s not giving up hope on Bitcoin includes this comment on the crash on Wednesday May 19th:


Take the following Nostradamus-esque note which was supposedly posted to 4chan last Tuesday, May 18 predicting the entire ugly trading episode of last week: 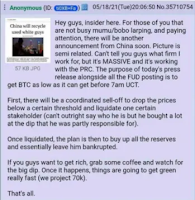 How did this insider really know what was coming? Or was it simply a lucky coincidence? Who was his group trying to shake out anyway? (Was it Elon?) How does that bode for other sizeable and clearly transparent corporate treasury holders of bitcoin in the future? And why did they share this information on 4chan?

"REMINDER: As the bull market fades, many projects will too! Expect a huge increase in exit scams over these next few months.

Never invest in projects that are very new, with anonymous teams, made as memes, and have a lack of real utility. Stay safe everyone!"

The Chinese government can be more disruptive than Elon Musk. Tim de Chant reports in China will likely ban all bitcoin mining soon that:

"The government will “crack down on bitcoin mining and trading behavior and resolutely prevent the transfer of individual risks to the society,” said the statement, which was issued by the Financial Stability and Development Committee of the State Council, the country’s cabinet equivalent. The committee is chaired by Vice Premier Liu He, who acts as President Xi Jinping’s top representative on economic and financial matters.

“The wording of the statement did not leave much leeway for cryptocurrency mining,” Li Yi, chief research fellow at the Shanghai Academy of Social Sciences, told the South China Morning Post."

The US government is clearly far behind the Chinese government in addressing the externalities of cryptocurrencies. Jeff Stein's White House reviews ‘gaps’ in cryptocurrency rules as bitcoin swings wildly:

"Administration officials are studying potential “gaps” in oversight related to the crypto market, such as whether it can be used to finance illicit or terrorist activities, the people said. They have also discussed whether some protections are needed for average retail investors purchasing cryptocurrency. The White House and the Treasury Department are also publicly backing a new plan to target cryptocurrency as part of a broader effort to address tax avoidance."

If you are struggling to understand what is actually behind Anthony Esposito's El Salvador's president says will send bill to make bitcoin legal tender, David Gerard's El Salvador to adopt proprietary payment network denominated in Bitcoin is here to help:

"Balaji Srinivasan has already proposed paying off small countries to pump Bitcoin with this sort of announcement. [Twitter] Many have guessed that this is how the El Salvador deal happened."

The pumping and dumping continues!

Another of the crypto-CEOs is Michael Saylor of MicroStrategy. Jemima Kelly reports that MicroStrategy triples down on bitcoin:

"Last Monday, we brought you the news that the software company-turned crypto hoarder had announced it was raising $400m of senior secured debt to add to its stash of 92,079 bitcoins (about $3.7bn at this particular nanosecond’s prices).

The announcement neatly coincided with another rather less happy one: that the company also expected to incur an impairment loss “of at least $284.5m related to its bitcoin for the three months ending June 30, 2021”.

But Michael Saylor isn’t the kind of man who would let the loss of 78 per cent of his equity base get to him."

Cas Piancy gives some insight into the kind of man Saylor is in MicroStrategy Before Bitcoin by examining an SEC case against the company in 2000:

"In March of 2000, MicroStrategy is forced to restate its accounting numbers for 1998 and 1999. This is very unfortunate, as the stock price, which has gone from the IPO of $6 to an unreal $333, is now set to come back to Earth. And it does so in dramatic fashion, falling an astounding ~91% in one month or so.
...
The end result of this action is a settlement where Michael Saylor (CEO), Sanjeev Bansal (COO), and Mark Lynch (CFO) neither proclaim guilt nor innocence, pay fines, and MicroStrategy pays a large fine, as well. Without getting into details, the defendants are also ordered to cease from ever engaging in any activity like this again and are more closely monitored for an extended period of time."

Price Waterhouse Coopers, MicroStrategy's auditors, paid a $51M fine for failing to notice the blatant fraud Saylor and friends were engaged in. Piancy points to a "very troubling" aspect of the settlement with Saylor, Bansal and Lynch:

"The $10M to be paid by the three officials ... will be paid in MicroStrategy stock"