Vicky Reich gave a brief talk at the Building A Better Web: The Internet Archive’s Annual Bash. She followed Jefferson Bailey's talk, which reported that the Internet Archive's efforts to preserve the journals have already accumulated full text and metadata of nearly 8.7M articles, of which nearly 1.5M are from "at-risk" small journals. This is around 10% of the entire academic literature.

Below the fold, an edited text of Vicky's talk with links to the sources.

I want to tell you two stories about two journals; Genders and Exquisite Corpse. 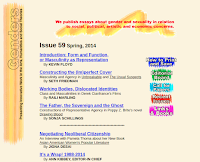 Genders was first published in 1988. As the first major humanities journal to focus on theories of gender and sexuality, it was both influential and controversial. Starting in 1998, it was published online only. In 2014, the editor-in-chief retired, and she stopped paying the web hosting bills. 15 years of Genders appeared to be lost.

Knowing that this was an important journal, I made sure the Internet Archive had crawled Genders while it was available. Now, the Wayback Machine has the only complete, original copy of the back issues.

Andrei Codrescu edited “Exquisite Corpse”, from 1983 through 2015. Codrescu is a Romanian-American poet, novelist, essayist, screenwriter, and NPR commentator. For 25 years, he was a Distinguished English Professor at Louisiana State University. Exquisite Corpse was a notorious anti-literary- literary journal. Rebellion, passion and black humor were trademarks.

We know of several times when the future of Exquisite Corpse was in danger. In 2001 Codrescu begged readers:


We need $25,000 dollars to keep bringing you the Corpse. Anything from $20 upwards would be a great help!

After Hurricane Katrina, Exquisite Corpse ceased publication. It resumed in 2008 with this from Codrescu:


Welcome to the Post-Katrina Resurrection Corpse, back from a dank hiatus of one year in a formaledehyde-poisoned FEMA trailer. We festered, we raged, we contemplated suicide, and in the end, voted for life because we are a Corpse already and we hate to keep on dying, just like the ideals of the Republic.

Codrescu has declared, “The Corpse isn't dead yet”, and due to the Internet Archive, it’s unlikely to die. The WayBack machine has the only complete copy of original back issues.

Here are three examples from Turkey, Nigeria, and Russia. These titles are targeted for capture in the coming year:
This kind of local environmental research has the potential to inform, for example, responses to global climate change.

I am proud to be working with the Internet Archive’s staff to ensure that the Web’s vast and deep trove of journal literature persists. This work helps to move forward Brewster’s vision; A web that helps us understand our world, and preserves the human record.

Update: the video of Vicky's talk is here.
Posted by David. at 8:00 PM