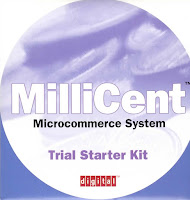 When I retired more than 4 years ago a top-priority task to keep me occupied was cleaning out the garage. It turned out that there were a lot of other things to do, and I never made it to the La-Z-Boy, let alone the mess in the garage.

As this Labor Day long weekend approached Vicky became very insistent that that we at least start actually doing some clearing. Our first target was the many boxes of books, a good portion of which were from the eclectic collection of the late Mark Weiser. In among them we found this 1998 CD, a relic of the early days of the Web when it was generally understood that the Web's business model would be micropayments.

Below the fold I discuss the history of what Paul Krugman would probably call a "zombie idea".

In the late 90s as the Web was becoming an arena for commercial interests it became obvious that content providers needed to be rewarded for their efforts. There were two competing models of how this could be done; advertising and micropayments. In the advertising model companies would pay Web sites for including their message in pages that were free to view. In the micropayment model visiting a page would automatically deduct a payment from the reader's wallet, with the amount being so small it would not be a disincentive. MilliCent is one of the four such systems Wikipedia discusses under Early research and systems. It was a project of Digital Equipment's Systems Research Center.

The protocol was described in The Millicent Protocol for Inexpensive Electronic Commerce by Steve Glassman, Mark Manasse, Martín Abadi, Paul Gauthier and Patrick Sobalvarro. The basic idea was that users made infrequent, relatively large transfers of funds to brokers, and in return obtained digital scrip (think coins) with which to make small payments. The goal was to reduce transaction costs for small payments as much as possible because, like most micropayment advocates, they considered the barrier to monetizing Web content to be transaction costs.

Clay Shirky's 2000 The Case Against Micropayments debunking starts by capturing the end-of-century hype around micropayments:


Jakob Nielsen, in his essay The Case for Micropayments writes, "I predict that most sites that are not financed through traditional product sales will move to micropayments in less than two years," and Nicholas Negroponte makes an even shorter-term prediction: "You're going to see within the next year an extraordinary movement on the Web of systems for micropayment ... ." He goes on to predict micropayment revenues in the tens or hundreds of billions of dollars.

Before providing a detailed analysis of their failure, Shirky provides the TL;DR:

The Short Answer for Why Micropayments Fail

Users hate them.
...
Why does it matter that users hate micropayments? Because users are the ones with the money, and micropayments do not take user preferences into account.

An even more detailed debunking was Andrew Odlyzko's 2003 The Case Against Micropayments. It again focused on the user's preferences. While all their arguments are valid, they miss what I think is a much simpler reason why micropayments didn't become the Web's business model.

Advertising was an incumbent business model for content providers in other channels, for example TV, radio, newspapers and magazines. To displace it, micropayments needed to be sufficiently better for the content providers than advertising. But, from their point of view, micropayments had a major disadvantage. They depended upon the reader doing something other than simply accessing the content. A business model in which the reader was passive was obviously less risky than one in which the user was active. It isn't necessary to delve into the contorted UX (User Experience) of setting up accounts with brokers, monitoring account balances, refilling accounts, and deciding whether to purchase. Because the decision to adopt micropayments was for the content provider, not for the reader, the risk of an untried technology that depended on readers cooperating was the key barrier. Transaction costs were at most a second-order problem. The focus of micropayment system developers like the MilliCent team on reducing them was essentially irrelevant.

Despite these stakes through its heart, the zombie idea of micropayments refused to die. In early 2009 it formed a significant part of Satoshi Nakamoto's case for Bitcoin:


The root problem with conventional currency is all the trust that's required to make it work. The central bank must be trusted not to debase the currency, but the history of fiat currencies is full of breaches of that trust. Banks must be trusted to hold our money and transfer it electronically, but they lend it out in waves of credit bubbles with barely a fraction in reserve. We have to trust them with our privacy, trust them not to let identity thieves drain our accounts. Their massive overhead costs make micropayments impossible.


This was one of the many failures of Nakamoto's vision. With average transaction fees currently about $3.56 the "massive overhead costs" make micropayments infeasible. But this vastly understates the "massive overhead costs" of Bitcoin. First, when as now demand for transactions is low fees are low. As the graph shows, when demand for transactions is high fees are high, spiking in April to $60. Second, the actual cost of a Bitcoin transaction comprises not just the fee but also the mining rewards. Currently, fees are under 10% of the total mining reward, so that the total cost of a $3.60 average fee transaction is actually $36. 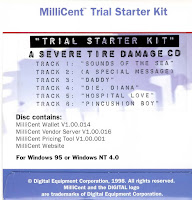 PS: Note that the CD contains tracks by Severe Tire Damage, the first band to play live on the Internet. The band's core members were:

Remember how cryptocurrencies were going to facilitate micropayments? Bitfinex Just Spent $23.7 Million In Fees To Transfer 100,000 USDT In A Single Ethereum Transaction:

"The exchange made the transaction few hours ago, according to block explorer Etherscan. The transaction was sent from one of Bitfinex’s main wallets and the money ended up at one of Deversifi’s wallets — a non-custodial exchange that was spun out of Bitfinex in 2019.
...
The transaction was included in a block that was mined by an unknown Ethereum miner, who ranks in the top ten miners by blocks mined over the last seven days.

This may be the largest Ethereum transaction fee ever paid in dollar terms. Previous notable occasions include two transactions that were made in June 2020 that added up to $5.2 million in fees."

Remember how important immutability was? As A Gesture Of Good Will, Crypto Miner Returns 7626 Ethereum (Worth $23.7 Million) Incorrectly Paid Transaction Fee Back to Deversifi.