The invaluable statistics published by Backblaze show that, despite being built from technologies close to the physical limits (Heat-Assisted Magnetic Recording, 3D NAND Flash), modern digital storage media are extraordinarily reliable. However, I have long believed that the models that attempt to project the reliability of digital storage systems from the statistics of media reliability are wildly optimistic. They ignore foreseeable causes of data loss such as Coronal Mass Ejections and ransomware attacks, which cause correlated failures among the media in the system. No matter how many they are, if all replicas are destroyed or corrupted the data is irrecoverable.

Modelling these "black swan" events is clearly extremely difficult, but much less dramatic causes are in practice important too. It has been known at least since Talagala's 1999 Ph.D. thesis that media failures in storage systems are significantly correlated, and at least since Jiang et al's 2008 Are Disks the Dominant Contributor for Storage Failures? A Comprehensive Study of Storage Subsystem Failure Characteristics that only about half the failures in storage systems are traceable to media failures. The rest happen in the pipeline from the media to the CPU. Because this typically aggregates data from many media components, it naturally causes correlations.

As I wrote in 2015's Disk reliability, discussing Backblaze's experience of a 40% Annual Failure Rate (AFR) in over 1,100 Seagate 3TB drives:


Alas, there is a long history of high failure rates among particular batches of drives. An experience similar to Backblaze's at Facebook is related here, with an AFR over 60%. My first experience of this was nearly 30 years ago in the early days of Sun Microsystems. Manufacturing defects, software bugs, mishandling by distributors, vibration resonance, there are many causes for these correlated failures.

Despite plenty of anecdotes, there is little useful data on which to base models of correlated failures in storage systems. Below the fold I summarize and comment on an important paper by a team from the Chinese University of Hong Kong and Alibaba that helps remedy this.

An In-Depth Study of Correlated Failures in Production SSD-Based Data Centers by Shujie Han et al is an important contribution to the study of storage systems. Their abstract reads: 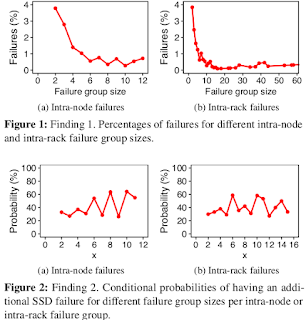 The paper is in two main parts. In the first they analyze the data collected from the field looking for correlations among the failures. They report twelve findings, listed below. To summarize, they found very significant correlations among the failures of drives in the same node or in the same rack, as shown in their Figures 1 and 2. This validates the arguments I've been making about the optimism of the models.

They also found significant failure correlations among drives of the same model and age. The obvious conclusion is that configuring nodes and racks with homogeneous drives is asking for trouble; diversity of drives enhances reliability.

Two additional observations are consistent with earlier research, that the more writes the more errors, and that "SMART attributes have limited correlations with intra-node or intra-rack failures"

In the second part of the paper, the authors describe how they took the data from the first part and built models including the correlations they observed. They simulated three types of fault tolerance:
They compare the reliability of the various techniques using two metrics:
They report three findings:

Commendably, the authors include a comprehensive bibliography and overview of related work, only some of which I have previously discussed. Highlights include, in date order:
As you can see, corrrelations have been a recurring topic for a decade and a half. They have been detected at all levels from individual sectors to drives to RAID groups and now, thanks to Han et al, at the levels of nodes and racks in data centers.


Findings from the data