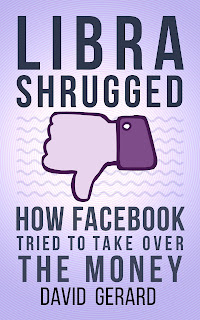 David Gerard has been writing a follow-up to his must-read and surprisingly successful Attack of the 50 Foot Blockchain: Bitcoin, Blockchain, Ethereum & Smart Contracts, entitled Libra Shrugged: How Facebook Tried to Take Over The Money. The Kindle version goes live on Amazon next Monday.

As one of his Patreons, I've been reading the chapters as he finished them. It isn't a laugh-a-minute read like his first book, but like the first it is a copiously sourced account of incredible hubris. Facebook's hubris led them to believe that they could, in effect, become a sovereign currency issuer like a government, without any of the responsibilities that governments assume when they control a currency. Actual governments looked at this proposal and responded "you have to be kidding". Follow me below the fold for more.

The idea of issuing a cryptocurrency took root inside Facebook when they hired some Bitcoin enthusiasts. Apparently Zuckerberg was incapable of seeing through their hype, which tells you something about how good he is at understanding technology. The enthusiasts tried to sell the idea of Facebook's cryptocurrency (called Libra), just as they had tried to sell Bitcoin, with the idea that it would "bank the unbanked". But, as Gerard carefully explains, the goal really was "unbanking the banked", allowing rich sociopaths to evade the "Know Your Customer/Anti-Money Laundering" regulations as they exported their riches to tax havens.

Gerard's account of the how the appalled reactions of major governments forced Facebook to back gradually away from their idea, while trying to pretend that they weren't, is wonderfully detailed and well worth reading. He includes a history of the various failures actual governments have encountered trying to launch Central Bank Digital Currencies.

I recommend reading it.

PS: the reasons for the recent dearth of posts are two-fold. First, I'm busier than I ever was when I had a paying job now we are running a one-room school for our three grandkids doing remote learning. Second, remote school over 3Mbit/sec DSL wasn't ideal. I've been consumed by the drawn-out and somewhat complex process of upgrading from Sonic's DSL to their gigabit fiber. Like their DSL, where AT&T owns the copper but Sonic is the ISP, AT&T owns the fiber and was the source of the delays. The complexity was going from four static IP adddresses to one dynamic IP address, and upgrading our home network to IPv6

AS regards "banking the unbanked" in the US, J.P. Konig has a long discussion entitled Why are so many Americans content to be unbanked?:

"According to FDIC, the most popular reason cited by unbanked households for not having a bank account is don't have enough money to meet minimum balance requirements. 48.9% of all unbanked respondents chose this option. What this indicates is that banks are setting standards that many Americans simply cannot meet, particularly poor households (FDIC data shows that 23.3% of families with income below $15,000 are unbanked compared to an American average of 5.4%). Perhaps the unbanked are "not at all interested" in getting an account because they're tired of being rebuffed.

The second most popular reason that the unbanked give for not having a bank account is don't trust banks at 36.3%. The 2019 survey doesn't provide much colour on what this means. Do unbanked households not trust banks because of surprise fees? Are there cultural explanations?"

David Gerard reports on the latest scale-back of Facebook's original Libra stablecoin proposal in Facebook’s Diem stablecoin moves to the US, and hooks up with Silvergate Bank:

"As usual, Diem hopes to run a pilot system by the end of whatever the current year is at the time of the announcement.

It’s possible that Facebook will finally cut the Diem plan down to something the regulators will let happen. Maybe this one’s boring enough."