Bram Cohen, the creator of BitTorrent, gave an EE380 talk entitled Stopping grinding attacks in proofs of space. Two aspects were really interesting:
But there was another aspect that concerned me. Follow me below the fold for details.

I'll first outline Cohen's critiques of Proof of Work, Proof of Stake, and Proofs of Other Things, then summarize his proposed scheme combining Proof of Space with Verifiable Delay Functions (PoSp/VDF), and conclude by addressing the aspects of his talk that concerned me. I have tried to refer to quotes, concepts and slides by the time at which they appear in the video thus [MM:SS] but these times are approximate. I apologize if the quotes are mis-transcribed from the audio. 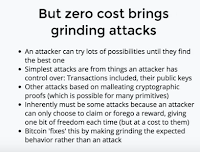 The goal of PoSp/VDF is to reduce greatly the cost of verifying blocks in a blockchain. But "zero cost brings grinding attacks", in which an attacker tries lots of possibilities to find the best one. "Bitcoin fixes this by making grinding the expected behavior rather than an attack" using Proof of Work, in which peers try to invert a hash function. The computational cost of the vast number of hashes needed is the cause of Bitcoin's massive energy consumption.


powerful miners have the ability to rewrite the block chain and replace their own transactions, allowing them to take back previous payments. The cost of this attack depends on the percentage of total network hash rate the attacking miner controls. The more centralized mining becomes, the less expensive the attack for a powerful miner.

They provide a real example:


In September 2013, someone used centralized mining pool GHash.io to steal an estimated 1,000 bitcoins (worth $124,000 USD) from the gambling site BetCoin. The attacker would spend bitcoins to make a bet. If he won, he would confirm the transaction. If he lost, he would create a transaction returning the bitcoins to himself and confirm that, invalidating the transaction that lost the bet. By doing so, he gained bitcoins from his winning bets without losing bitcoins on his losing bets. Although this attack was performed on unconfirmed transactions, the attacker had enough hash rate (about 30%) to have profited from attacking transactions with one, two, or even more confirmations.

More details of this attack are here.

Proof of Stake is an alternative consensus system for cryptocurrencies in which holders put some or all of their holdings "at stake", a process known as "bonding". Blocks of transactions are validated by a quorum of the currency "at stake". Misbehavior by holders is deterred by "slashing", miscreants lose their stake. It appears attractive, in that it can vastly reduce the energy demand of Proof of Work systems such as Bitcoin's. It is especially attractive to core team members and early adopters of a cryptocurrency, since they will be large holders and will thus be able to control the currency.

Cohen's critique of Proof of Stake starts around [8:30] and covers six main points:


Proofs of Other Things 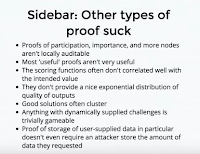 Cohen's critique of other types of proof starts around [34:30]. The main points are:
In particular, at [37:50] he critiques "proof of storage of user-supplied data" as used by services such as Maidsafe. An attacker doesn't have to store the amount of data they requested: "because you can just take a key and use it to ... generate completely fake data which everyone else has to store the data to claim their rewards later and you yourself don't have to do that, you just store the seed and there's no way to detect that because they are all supposed to be encrypted files that just look like garbage anyway". Cohen's explanation of PoSp/VDF starts at [13:32]. His summary is:
My understanding of PoSp/VDF may be deficient. I have read Beyond Hellman’s Time-Memory Trade-Offs with Applications to Proofs of Space, which explains the PoSp technique, but the mathematics exceed my capabilities. The VDF technique doesn't appear to have been published yet.

As I understand it, the proof of space technique in essence works by having the prover fill storage space with an array of pseudo-random points in [0,1] via a time-consuming process. The verifier can then pose to the prover a question that can be answered either by a single storage access (fast) or by repeating the process of filling the storage (slow). By observing the time the prover takes the verifier can distinguish these two cases, and thus be assured that the prover has stored the (otherwise useless) data.

As I understand it, verifiable delay functions work by forcing the prover to perform a specified number of iterations to generate a value that the verifier can quickly show is valid. 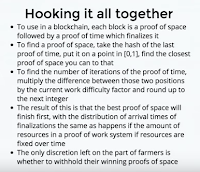 Cohen describes how these two techniques work together in a blockchain at about [22:38]:
In other words, the winning verification of a block will be the one from the peer whose plot contains the closest point, because that distance controls how long it will take for the peer to return its verification via the verifiable delay function. The more storage a peer devotes to its plot, and thus the shorter the average distance between points, the more likely it is to be the winner because its proof of space will suffer the shortest delay.

Just as with Bitcoin's Proof of Work, farming pools would arise in PoSp/VDF to smooth out income. The pool would divide up [0,1] among its members.

One aspect of the talk that concerned me was that Cohen didn't seem well-informed about the landscape of storage. Here are a few quotes:
Another aspect of the talk that concerned me was that, as I understand it, Cohen's vision is of a PoSp/VDF network comprising large numbers of desktop PCs, continuously connected and powered up, each with one, or at most a few, half-empty hard drives. The drives would have been purchased at retail a few years ago. The desktop PC is a declining market, and the devices such as laptops, smartphones, tablets and small form-factor PCs that are displacing it use flash storage, are intermittently connected, and asleep whenever possible. Thus Proof of Space addresses a declining market. The edge of the Internet has changed since Cohen invented BitTorrent.

These changes have affected the market for hard disk. Flash is increasingly destroying the markets for enterprise drives, and for 2.5" laptop drives. One the other hand, "The Cloud" has increased demand for "nearline" and consumer 3.5" drives. They are purchased in bulk at prices far lower than retail by customers such as Amazon, who cannot afford to have 50% of their investment in storage media sitting empty. Nevertheless, the small proportion of their total inventory that is empty on average gives them much more empty storage than any retail customer.

Cohen's first slide claims "As long as rewards are below depreciation value it will be unprofitable to buy storage just for farming" Suppose a network matching Cohen's vision existed, how would economies of scale affect it? The cloud companies' empty drives are brand new, purchased in bulk direct from the manufacturer at a huge discount. That is three reasons why they would have much lower cost per byte than the drives in the network nodes. If the cloud companies chose to burn-in their new drives by using them for Proof of Space they would easily dominate the network at almost zero cost.

Once again Economies of Scale in Peer-to-Peer Networks was prophetic.

PS - I have not had time to analyze in detail the FileCoin proposal, which has some similarities to PoSp/VDF. It has many significant differences, in that it stores user data rather than verifies transactions, uses a combined Proof of SpaceTime rather than separate proofs, and employs bonding and slashing. It also appears to depend upon Lightning-style off-chain payment channels.

"Proof-of-stake is a bit too obviously “thems what has, gets” — so you have to convince the users to go along with it. It’s also as naturally centralising as proof-of-work, if not more so.
...
Vitalik Buterin has been talking about proof-of-stake since 2013. Ethereum was intended to be proof-of-stake in the white paper, but Buterin noted in 2014 that proof-of-stake would be nontrivial — so Ethereum went for proof-of-work instead, while they worked on the problem.
...
Ethereum Casper, the project to move Ethereum to proof-of-stake, started in 2014. It’s been six months away for four years now. The Proof of Stake FAQ is a list of approaches that haven’t quite worked well enough. Casper has had numerous technical and security issues. The current version only adds a bit of proof-of-stake to the existing proof-of-work system.

But Casper 0.1 has just been released — and Buterin is talking about taking it live."

More from Chia Network, the company building on Bram's ideas, in The ASIC Resistance of Proof of Space.

Back in 1999 Ron Rivest posed a cryptographic puzzle based on a Verifiable Delay Function (VDF). Estimates at the time were that it would take until the 2030s to solve it. But, as Katyanna Quach reports in Self-taught Belgian bloke cracks crypto conundrum that was supposed to be uncrackable until 2034:

"Fabrot wrote the equation in a few lines of C code and called upon the GNU Multiple Precision Arithmetic Library, a free mathematical software library to run the computation over 79 trillion times. He used a bog standard PC with an Intel Core i7-6700 processor, and took about three and a half years to finally complete over 79 trillion calculations."

Bram Choen isn't the only skeptic about Proof of Space; Messari CEO: Ethereum 2.0 Proof-of-Stake Transition Not to Happen Until at Least 2021 by Helen Partz reports on discussions at the Ethereal Summit.

As I predicted three years ago, once the Chia network got started the cloud providers' economies of scale would kick in. Jamie Crawley now reports that Amazon Offers Mining in the Cloud for New Chia Cryptocurrency.

David Gerard's Chia Is a New Way to Waste Resources for Cryptocurrency is the summary of the rollout of the Chia network that I wish I would have written. Go read it.