CNI Talk on the Economic Model

I gave a talk at the Fall CNI meeting on the work I've been doing on economic models of long-term storage. CNI recorded the talk and I'm expecting them to post the video and the slides. Much of the talk expanded on the talk I gave at the Library of Congress Storage Workshop. The new part was that I managed to remove the assumption that storage prices could never go up, so I was able to model the effect of spikes in storage costs, such as those caused by the floods in Thailand.. Below the fold is the graph. 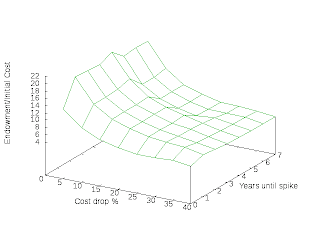 The Z-axis shows the ratio between the endowment needed for 98% probability of not running out of money in 100 years. The X axis shows the annual percentage rate at which the cost of storage decreases in the absence of the spike. The Y=0 axis assumes no spike in costs. The rest of the Y axis shows the effect of a spike that doubles costs, and takes two years to drop back to its pre-spike value, occurring at Y years after the start.

As you see, if storage costs drop rapidly, the spike has little effect, but if they drop slowly it can have a big impact. Note the "ridge" at Y=4, which is caused by the model's assumption of a 4-year service life for storage hardware. If costs spike just as your current hardware gets to the end of its service life, you are in a world of hurt.
Posted by David. at 11:00 AM

Slashdot points to a Computerworld article reporting that disk drive prices are stabilizing after approximately doubling in response to the Thai floods. Supply is expected to remain short of demand until the 3rd quarter of 2012, about a year after the floods. These numbers make the spike I used to generate the graph look fairly realistic.