Two of the externalities of cryptocurrencies I discussed in my Talk at TTI/Vanguard Conference were the way decentralization and immutability work together to enable crime, and their environmental impact. How well are mainstream media doing at covering these problems? The picture is mixed, as the two examples below the fold show.

First, a good effort by Edward Ongweso Jr. in ‘All My Apes Gone’: NFT Theft Victims Beg for Centralized Saviors:


On the eve of the new year, tragedy struck in Manhattan: Chelsea art gallery owner Todd Kramer had 615 ETH (about $2.3 million) worth of NFTs, primarily Bored Apes and Mutant Apes, stolen by scammers and listed on the peer-to-peer NFT marketplace OpenSea.

Kramer quickly took to Twitter and begged for help from OpenSea and the NFT community for help regaining his NFTs. Unsurprisingly, he was ripped to shreds by others in the community for not storing his valuable JPEGs in an offline wallet; however, OpenSea froze trading of the stolen NFTs on its platform.

More than a few commentators pointed out that OpenSea's intervention here—and especially Kramer's pleas for a centralized response—seemed to go against a key tenet of the industry that often bumps up against usability: the idea that "code is law," and once your tokens are in someone else's digital wallet, that's the end of the game. While OpenSea did not actually reverse the transaction on the blockchain, it did block the stolen NFT's sale on its own platform, which is the most popular marketplace for NFTs.

Of course, you can bet the "commentators" would change their tune if it was their $2.3M "worth" of NFTs that had been stolen. Ongweso understands the gap between ideology and the real world:


OpenSea's interventions in the cases of stolen NFTs show how centralized intermediaries often have an important role wherever the decentralized world of the blockchain meets the real world. It's also not the first time that similar moves have happened elsewhere in crypto, even though they break from the core dogma of immutability and self-sovereignty.

The entire cryptocurrency ecosystem is based upon inequality of participants, the existence of the "greater fool" to whom tokens can be sold at a profit. Thus the importance of preserving the sanctity of "wealth transfer". If your whole purpose is to rip off the "greater fool" the idea that the "greater fool" might be able to do something about the rip-off is a big problem. Ongweso understands this:


It increasingly feels like the inconsistent application of rules in this space more often results in protecting wealth transfer schemes than protecting all users equally, and obscuring the deep centralization already present: less than one percent of users (institutional investors) account for 64 percent of Coinbase’s trading volume, and 10 percent of traders account for 85 percent of NFT transactions and trade 97 percent of all NFTs at least once.

It’s not clear how this contradiction will be resolved. Uncritically believing decentralization is a salve that immediately transforms something’s politics endangers not only users but crypto’s fever dream of disruption. Take the adoption of blockchain-based technology by investment and central banks. One way to look at this is as a sign of crypto’s inevitability. If you look under the hood, however, it’s more plainly a move by financial institutions to reinforce fiat and further centralize the global financial system.

So long as the contradiction persists and the uncritical belief is held, crypto will find itself in an increasingly weaker position to do anything about any of these concerns.

The contradiction must persist, because the ideology of decentralization is fundamental to cryptocurrencies, but in the real world they are not, and cannot be, decentralized.


Hence that tricky question for mainstream investors fretting about inflation in 2022: can you dabble in crypto without getting your hands dirty in the real world?

The short answer is “yes — but not easily”. First, the good news: in 2021 this once-anarchic corner of finance started to organise itself to go greener. Most notably, a coalition of 200-odd crypto entities recently joined forces with the Rocky Mountain Institute, a Colorado-based environmental lobby, to create a Crypto Climate Accord.

The accord signatories have apparently agreed to cut the carbon emissions from electricity use to net zero by 2030, partly via carbon offsets but also by switching all blockchain technology to renewable energy sources by 2025 and using energy tracking tools such as so-called green hashtags.

David Gerard illustrates the credibility of these "commitments":


Crypto miner Luxxfolio has signed up to the Crypto Climate Accord “committing” them to power all their mining with 100% renewable electricity. How are they implementing this? By buying 15 megawatts of coal-fired power from the Navajo Nation! They’re paying less than a tenth what other Navajo pay for their power — and 14,000 Navajo don’t have any access to electricity. The local Navajo are not happy.

Tett gives far too much credit to the alternatives:


Many of the newer digital assets — such as cardano or solana — have therefore embraced a different process, created in 2012, known as “proof of stake”.

Purists argue that PoS might be less secure than PoW. But it is also far less energy intensive. And some digital assets, such as chia, have cut energy usage even more by adopting a “proof of space and time” algorithm. Taken together, these moves could further reduce the sector’s carbon footprint, particularly since Joe Lubin, a leader in ethereum (the second biggest digital asset) says ethereum will move from PoW to PoS in the coming months. 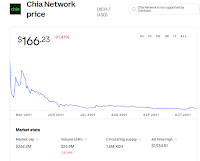 Chia hasn't exactly set the world on fire, but not for the reason Tett suggests. And Julia Magas writes in When will Ethereum 2.0 fully launch? Roadmap promises speed, but history says otherwise:


Looking at how fast the relevant updates were implemented in the previous versions of Ethereum roadmaps, it turns out that the planned and real release dates are about a year apart, at the very minimum.

There are many problems with Proof-of-Stake but the main one isn't that it is "less secure", which given its massive extra complexity it may well be, but that the Gini coefficient of cryptocurrencies is extreme and this means it isn't effective at decentralization.

But Tett does identify three real problems with the frantic greenwashing of cryptocurrencies, she just under-estimates them:


Yet, as Goldman says, obstacles remain. One big problem is that bitcoin remains wedded to PoW consensus, and it accounts for about half of the $2tn crypto universe.

There is no possibility that Bitcoin miners will abandon their investment in equipment and migrate away from PoW:


A second problem is that the industry is so murky that it remains to be seen how much transparency the CCA can really create, particularly among non-signatories. Or, as the Sustainable Funds Monitor observes: “In the end, the lack of transparency and data make it exceedingly difficult to point to any one currency being ‘greener’ than others.”

The great mining migration shows that mining will move quickly to wherever electricity is cheapest, so no pledges will last long:

Tett misses the bigger point, which is that even if mining used 100% renewable power, it would compete for that power in a market that is supply constrained, displacing more beneficial uses, and increasing prices for everyone. This point isn't lost on, for example, the residents of Zeewolde. Morgan Meaker reports on this in Facebook’s data center plans rile residents in the Netherlands: