Nassim Nicholas Taleb has a draft paper entitled Bitcoin, Currencies and Bubbles that applies quantitative finance and economic arguments to cryptocurrencies. It is definitely worth reading. Spoiler, he's not an enthusiast! Below the fold, some commentary on it.

Cryptocurrency mining in Sichuan, especially in the rainy season, is hydro-powered, so miners thought they'd be spared the Chinese government's crackdown, for example in Qinghai, Xinjiang and Yunnan. But they were rapidly disabused of this idea, as Matt Novak reports in Bitcoin Plunges as China's Sichuan Province Pulls Plug on Crypto Mining:


Bitcoin continued its dramatic plunge to $32,281 Monday morning, down 17.65% from a week earlier as some of China’s largest bitcoin mining farms were shut down over the weekend. The bitcoin mining facilities of Sichuan Province received an order on Friday to stop doing business by Sunday, according to Chinese state media outlet the Global Times.

The Sichuan Provincial Development and Reform Commission and the Sichuan Energy Bureau issued an order to all electricity companies in the region on Friday to stop supplying electricity to any known crypto mining organizations, including 26 firms that had already been publicly identified,

As the "price" chart shows, the crackdown is having an impact. The result of this is that miners' revenue has taken a hit. The result of this is to squeeze uneconomic mining out of the mining pools, decreasing the hash rate. The result of that is that the network has to adapt, by reducing the difficulty of mining the next block in order to maintain the six blocks an hour target for the Bitcoin blockchain, averaged over time. Below the fold, more details and graphs.

Last month I continued my blogging about storing data in DNA with an update on the work of the University of Washington/Microsoft Molecular Information Systems Lab (MISL). They are not the only group working on this technology. John Timmer's A DNA-based storage system with files and metadata discusses Random access DNA memory using Boolean search in an archival file storage system by James L. Banal et al from MIT and the Broad Institute. Their abstract reads:


DNA is an ultrahigh-density storage medium that could meet exponentially growing worldwide demand for archival data storage if DNA synthesis costs declined sufficiently and if random access of files within exabyte-to-yottabyte-scale DNA data pools were feasible. Here, we demonstrate a path to overcome the second barrier by encapsulating data-encoding DNA file sequences within impervious silica capsules that are surface labelled with single-stranded DNA barcodes. Barcodes are chosen to represent file metadata, enabling selection of sets of files with Boolean logic directly, without use of amplification. We demonstrate random access of image files from a prototypical 2-kilobyte image database using fluorescence sorting with selection sensitivity of one in 106 files, which thereby enables one in 106N selection capability using N optical channels. Our strategy thereby offers a scalable concept for random access of archival files in large-scale molecular datasets.

Below the fold, some commentary on this significantly different approach to accessing DNA databases.

In How to Start Disrupting Cryptocurrencies: “Mining” Is Money Transmission, Nicholas Weaver makes an important point that seems to have been overlooked (my emphasis):


The mining process starts with a pile of unconfirmed digital checks, cryptographically signed by the accounts’ corresponding private keys (in public key cryptography, only the private key can generate a signature but anyone can verify the signature with the public key). Each miner takes all the checks and decides which ones they are going to consider. Miners first have to make sure that each check they consider is valid and that the sending account has sufficient funds. Miners then choose from the set of valid checks they want to include and collect them together in a “block.”

Below the fold, I look into the implications Weaver draws from this.

In Unstoppable Code? I discussed Joe Kelly's suggestion for how governments might make it impossible to transact Bitcoin by mounting a 51% attack using seized mining rigs. That's not the only way to achieve the same result, so below the fold I discuss an alternative approach that could be used alone or in combination with Kelly's concept.

I thought that the blizzard of spam comments had miraculously stopped, but no. What appears to have happened is that Blogger stopped sending me mail for each comment. Although this greatly helped my peace of mind, it meant that actual relevant comments sat in the queue being ignored along with the spam. I've put a reminder in my calendar to check the queue every few days, and rescued some comments from purgatory.
David. at 8:00 AM No comments:

Thomas Claiburn's FYI: Today's computer chips are so advanced, they are more 'mercurial' than precise – and here's the proof discusses two recent papers that are relevant to the extraordinary levels of reliability needed in long-term digital preservation at scale. Below the fold some commentary on both papers. 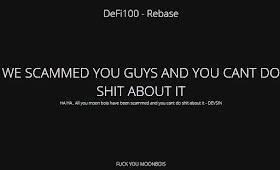 This is the website of DeFi100, a "decentralized finance" system running on the Binance Smart Chain, after the promoters pulled a $32M exit scam. Their message sums up the ethos of cryptocurrencies:


The business model of crypto is to provide a platform for crooks to scam muppets without running the risk of jail time. Few understand this. https://t.co/vFeyosRKPE

Governments around the world have started to wake up to the fact that this message isn't just for the "muppets", it is also the message of cryptocurrencies for governments and civil society. Below the fold I look into how governments might respond.