Below the fold, more on Rose's interesting post.
Hōryū-ji in itself is an example of the opposite approach to the long term, a single copy of durable materials carefully maintained:


This is Horyuji, an ancient Japanese temple, built in 607 AD. It is the world’s oldest surviving wooden structure. Horyuji was constructed from Japanese cypress that were roughly 2,000 years old. It has been 1,300 years since the cypress were cut down, and the wood still stands firm. “And they will be fine for the next 700 years,” said late-great chief Miya-daiku, Tsunekazu Nishioka. Miya-daiku is a specially trained carpenter who builds/maintains ancient temples and shrines. Their technical skills are usually passed down from father to son, through many years of hard, and skill developing, on-the-job training. According to Nishioka, “2000 year-old Japanese cypress is so robust yet resilient that it can maintain its great quality for another 2000 years, even after it’s cut down,” and that “people who initially build Horyuji in the 7th century knew about it. They knew that the building would last for another thousands of years, so they built it accordingly.”

But it is a great example of the kind of thinking that animates the Long Now Foundation. The Ise Shrine provides an example of a different but equally effective technique:


These temples made of thatch and wood—totally ephemeral materials—have lasted for 2,000 years. They have documented evidence of exact rebuilding for 1,600 years, but this site was founded in 4 AD—also by a visionary Japanese princess. And every 20 years, with the Japanese princess in attendance, they move the treasures from one from one temple to the other. And the kami—the spirits—follow that. And then they deconstruct the temple, the old one, and they send all those parts out to various Shinto temples in Japan as religious artifacts.

I think the most important thing about this particular example is that each generation gets to have this moment where the older master teaches the apprentice the craft. So you get this handing off of knowledge that’s extremely physical and real and has a deliverable. It’s got to ship, right? “The princess is coming to move the stuff; we have to do this.” It’s an eight year process with tons of ritual that goes into rebuilding these temples.


We use the 10,000 year time frame to orient our efforts at Long Now because global civilization arose when the last Interglacial period ended 10,000 years ago. It was only then, around 8,000 BC, that we had the emergence of agriculture and the first cities. If we can look back that far, we should be able to look forward that far. Thinking about ourselves as in the middle of a 20,000 year story is very different than thinking about ourselves as at the end of a 10,000 year story.

Rose presents a scolling list of long-lived institutions, starting with the Catholic Church sometime in the 1st century, followed by followed by 529AD the Order of St. Benedict. There are a few Universities; Cambridge, my alma mater is way down the list at 1209AD. But:


As you look at these, there’s a few things that stick out. Notice: brewery, brewery, winery, hotel, bar, pub, right? And also notice that a lot of them are in Japan. There’s been a rough system of government there for over 2,000 years (the Royal Family) that’s held together enough to enable something like the Royal Confectioner of Japan to be one of the oldest companies in the world. But there’s also temple builders and things like that.
...
In a survey of 5,500 companies over 200 years old, 3,100 are based in Japan. The rest are in some of the older countries in Europe.

But—and this was a fact I found curious, and one that speaks to the cyclical nature of things—90% of the companies that are over 200 years old have 300 employees or less; they’re not mega companies. 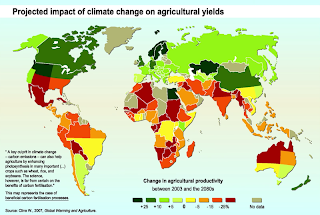 The most interesting part of Rose's post is at the end where he looks forward rather than back:


If any of us are to build an institution that’s going to last for the next few hundred or 1,000 years, the changes in demographics and the climate are a big part of it. This is the projected impact of climate change on agricultural yields until the 02080s. And as you can see, agricultural yields in the global south are going to be going down. In the global north and the much further north, more like Canada and Russia, they’re going to be getting a lot better. And this is going to change the world markets, world populations, and what we’re warring over for the next 100 years.

Note that the map is from 2007 and assumes that increased CO2 will improve crop yields. Climate gets a lot of attention right now, but demographics will have a huge impact:


There’s no scenario that I’ve seen where the world population doesn’t start going down by at least a hundred years from now, if not less than 50 years from now. ... And the world has really never lived through a time, except for a few short plague seasons, where the world population was going down—and, by extension, where the customer base was going down. ... Even more dangerous than the population going down is that the population is changing. ... If the world is made up largely of older people who hoard wealth, don’t work hard, and don’t make huge contributions of creativity to the world the way 20 year olds do, that world is a world that I don’t think we’re prepared to live in right now.