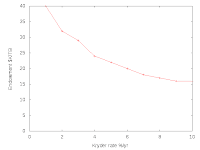 Duracloud currently works with the first three providers, charging $6K/yr "subscription" plus $1K/TB/yr, or $1/GB/yr, or $0.083/GB/mo. $1K/TB/yr is less than the advertised price of any of the providers they work with, except if they are storing more than 5PB of data in S3. This seems to pose two problems:
Unless cloud provider prices drop at least an order of magnitude faster in the future than they have in the past, Duracloud customers seem to be at risk of significant per-byte price increases.
David. at 2:00 PM